From Travel and Leisure Magazine 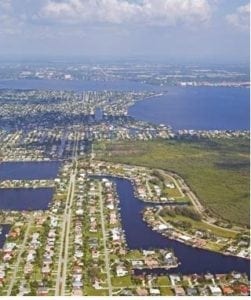 Nicknamed the “Waterfront Wonderland,” this city was conceived in the late ’50s and early ’60s when another would-be planned community, the Experimental Prototype Community of Tomorrow (EPCOT), was still a twinkle in Walt Disney’s eye. The latter became a theme park attraction, but Cape Coral was built around 400 miles of navigable canals. More than 150,000 now reside in this palm-fringed city, with the family car parked in front of the house—plus the family boat out back.

Learn about the Waterfront and Cape Coral’s Canal Systems