UPDATE: The 2019 statistics have been released. Cape Coral is now #1 in safety.

“The Florida Department of Law Enforcement (FDLE) released the Uniform Crime Reporting (UCR) statistics for 2019. Cape Coral was not only rated the safest city in Florida for violent crime, with populations greater than 100k residents but had the highest reduction in violent crime and non-violent crime than any other comparable city. The Uniform Crime Reporting Program’s function is to generate a reliable set of criminal statistics for use in law enforcement operation, administration, and management. The program is used around the nation and has become of the country’s leading social indicators as to the growth or decline in crime.

The attached Municipal Offense Data Chart captures cities with a population over 100k with a change in percentage of crime. It is evident, Cape Coral experienced the most significant decrease in violent crime.

(over 19%) In non-violent crime there was a decrease of 21.5%. This was the most significant improvement in comparison to comparable cities.”

Per Florida Department of Law Enforcement and Local Police Statistics, Cape Coral safety ranked second in Florida. It’s possible there are web sites reporting relative stats, such as “higher crime than the prior year,” but everything is relative. An increase from 0 homicides to 4 is an increase, true. Again, all relative to prior year statistics.

The “second safest city” rating for Cape Coral has been around for as long as we can remember. The year after year ranking illustrates consistency in the operations of the Cape Cops and consistency in local demographics.

When researching, be sure to note the fine print on the statistical report’s dates.Also compare and contrast with cities of similar populations. Cape Coral is a large city by land mass (meaning spread out versus vertical towers) with 150,000+ residents mostly living in single family homes.

Below is a chart from the Cape Coral Police Department showing the mid year updated for 2016. 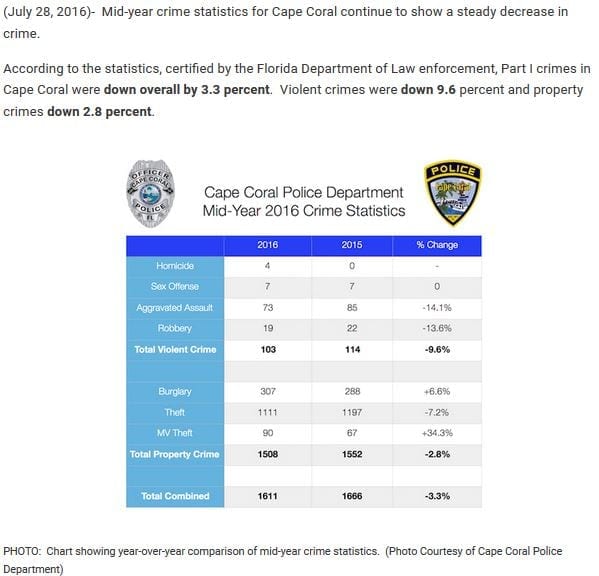 We’ve compiled a list of third party resources from police departments, news organizations, and government that provide data and reporting on the quality of life in Cape Coral safety.

Many people ask what the waterfront living is like in Cape Coral, so on this trip we took photos of Cape Coral canal homes along the way to create a “virtual tour” of our canal system in south Southwest Cape Coral (also known as Unit 64). View this slide show to get a flavor of living the waterfront lifestyle in beautiful Cape Coral Florida and what Cape Coral Real Estate has to offer.

In Cape Coral, it’s all about the backyard! 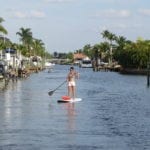 Cape Harbour in Cape Coral is a thriving yachting community. Gorgeous luxury homes and condos are complimented by a deepwater, saltwater marina, boutiques and art galleries, fine and casual dining, live outdoor concerts, car and boat shows, holiday events and more. The 5 star Rumrunner’s restaurant is well known throughout Southwest Florida. Browse Cape Harbour homes and condos for sale now.
Cape Royal is a golf course community of elegant single family homes. Homeowners can choose to join the Royal Tee golf club or they may simply enjoy the golf views without a membership. All homesites are oversized and have either a fairway or lake view. Low annual HOA fees are a bonus. Amenities include Clubhouse with a Grill and Lounge, Golf Course, Pro Shop, Tennis Courts, and 22 Lakes. View Cape Royal homes for sale.

One of the reasons Southwest Florida is so popular for boaters is that there are endless destinations for day cruising, anchoring, or overnights at marinas. And of course, the aqua blue waters of the Gulf of Mexico, the white sand beaches, and the pristine waterfront and beach front parks are also cherished. We have compiled here a list of over 20 of our favorite boating destinations.

Click the map image to open a new tab with an interactive map of these places to go by boat in Southwest Florida.

Oh, and all of these marinas, beaches, and restaurants, bars are most certainly just as fun to visit by car. The only location below that cannot be accessed by car is Cayo Costa State Park (there are ferry services to get you there). 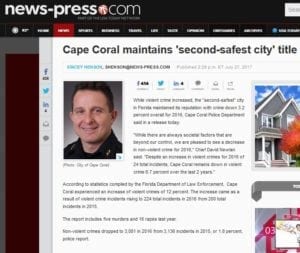 “While there are always societal factors that are beyond our control, we are pleased to see a decrease in non-violent crime for 2016,” Chief David Newlan said. 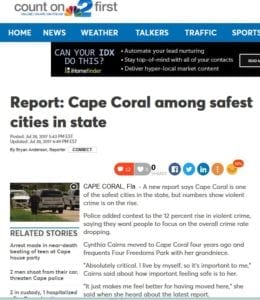 Cynthia Cairns moved to Cape Coral four years ago and frequents Four Freedoms Park with her grandniece. “Absolutely critical. I live by myself, so it’s important to me,” Cairns said about how important feeling safe is to her. “It just makes me feel better for having moved here,” she said when she heard about the latest report. 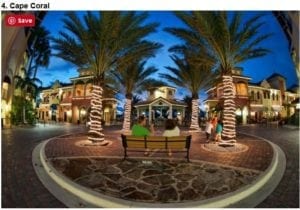 Cape Coral has an excellent crime rate, a lot of interesting local landmarks, and much lower housing costs than nearby Fort Myers.

We have purchased, sold and purchased again from Dave and Brenda. Always treated us with care and respect. Worked hard to achieve pricing we were offering or asking. Great communication skills. Helped to keep us focused and on track to achieve the goal we had set. Have recommended to several friends who share the same experiences as we have. Highly recommend both Dave and Brenda to purchase or sell.

Cape Coral is One of the Most Beautiful Canal Cities