Great Article in Boat US Magazine

Southwest Florida Yacht Charters, based in Cape Coral Florida at Tarpon Point Marina, organized the trip for the writers.Here are some excerpts:

Chris had us steer NautiGator in and out of tight slips several times each and operate it in several challenging scenarios, again and again. Then he gave us a test run using all the navigation equipment. Finally, he set us free. Our week exploring Pine Island Sound was a blast, even with unseasonably heavy wind. Every. Single. Day. Each marina we visited had encouraging dock masters right there with helping hands. Let’s face it, this was a defensive move; they see new boaters pinballing through these islands every day.

The Most Impressive Being we met on this trip was the American white pelican (Pelecanus erythrorhynchos), a genuine snowbird whose annual migratory commute is from the Pacific Northwest to the Gulf of Mexico. These are seriously big birds; males can tip the scales at 30-plus pounds, and their wingspan is almost as great as a California condor. We saw them every day, first when leaving Tarpon Point Marina, where SWFY keeps its boats, about a mile out on a starboard sandbar. A row of giants were hunkered down near several of their spindlier, 6-pound, local gray cousins — a family reunion. 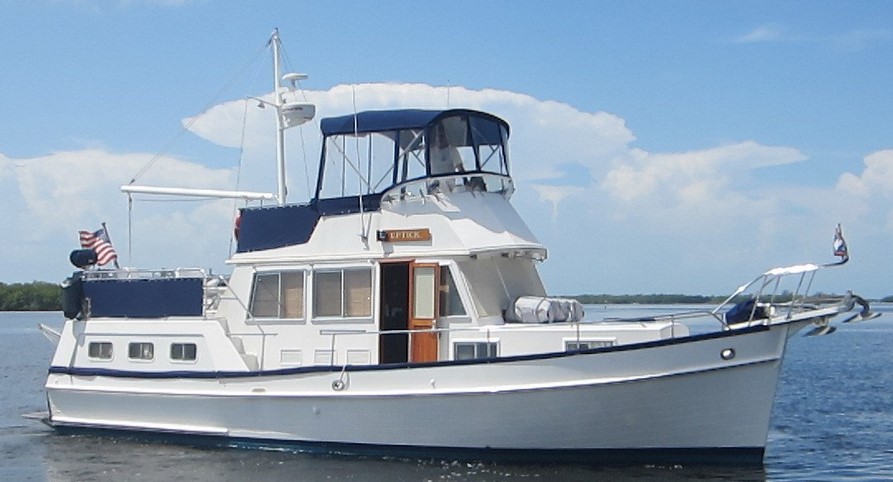 Among the many delights of cruising the shallow waters of Pine Island Sound in southwest Florida is that, even for powerboat beginners, it requires only straightforward eyeball navigation. As Captain Chris, who trained us in the operation of our beefy trawler, said, “Just follow the ICW markers. And remember, ‘Keep red right when returning to Texas.'” What, we wondered, does Texas have to do with it? Then it sunk in. We were on Florida’s Gulf Coast; the terminus of the Gulf ICW is indeed Texas.

Pine Island Sound serves up a western sky with few obstructions between you and the horizon. Sunset lingers longer. Or maybe it’s just cocktail hour, because every day we were tied up or anchored by 1600, waiting for bands of color to layer the skies and dazzle us, which most every night they did. Some people claim that advance preparation — or patient waiting — will make a sunset’s illusive green flash more likely.